The post is being written on March 18 USA time.

The day dawned bright and sunny with only light winds, but bitter cold. I felt good enough to move on, but my sleep was not the best.  After my typical breakfast of fried eggs, a couple of pieces of toast (no butter), and some fried potatoes, we headed up the trail at about 8:15 am. Today was a fairly short day; our distance was limited by the placement of the villages, and limiting elevation gain so as to allow acclimatization. I also walk very slowly at this altitude.

The route continued to follow the dwindling Dudh Koshi and initially contoured high on its left slope. We gained elevation gradually, but you could still feel the lack of air in my lungs. Thankfully, my cough has subsided somewhat, but soon the bitter cold air made my throat scream. The land was brown and punctuated by soaring icy peaks. I will let some photos do the talking here: 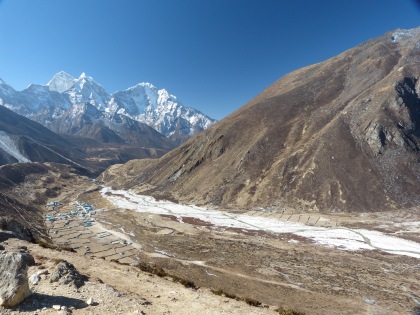 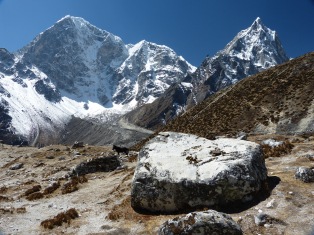 After our lunch at Tukla, we made a right turn and began a 1 hour climb up a towering moraine of the Khumbu Glacier, the glacier that originates in the cirque between Lhotse and Mount Everest. When we reach the top, we encountered a virtual graveyard. Not actual graves, but memorials to the scores of climbers who have perished trying to climb Mount Everest. I would have liked to spend a couple of hours looking at all of them, but it was damn cold and my lungs were searing. About 40 minutes later we arrived at Lobuche; an early day as we arrived before 2 pm.

The lodge here is not too good. I have a long march down a hallway to the toilet. I solved that problem; I procured an empty plastic bottle, so no trips to the loo. The lodge was packed, there are only a few lodges here, so all the lodges are pretty full. The staff are mostly young Nepali who work here during the trekking season. When the yak poo fire wouldn’t start, these kids made an attempt to get it going with a few pieces of wood and kerosene. They managed to get it going only after filling the room with smoke and the strong odor of kerosene. I fully expect a terrible headache tonight from the fumes, but the alternatives meant being somewhere far too cold. Thankfully, I spend only one night here.

Tomorrow, the plan is to hike to Gorak Shep that last village before base camp. After a snack there, we will continue onto EVEREST BASE CAMP! Lungs and legs willing.

3 thoughts on “The Home Stretch!”