When I last visited in 1986, Kathmandu had a population of 400,000, today this exploding city is now an order of magnitude larger with over 4 million inhabitants. Today I toured some of the famous landmarks of the city with a driver and guide. Dubar square, a couple of famous temples, and a cremation site along the river.

None of this impressed me much, but what did was the incredibly lasting impact from the earthquake that struck Nepal nearly 3 years ago. Over 9,000 people perished in that temblor, but it could have been far, far worse. The earthquake struck at noon on a Saturday which is Nepal’s Sunday. Schools were closed, children were out playing in the streets and parks, and businesses were shuttered. But the property lose was unbelievable. My driver said that in his village only a single house was left standing and that house became a field trip stop for building engineers. Bricks are everywhere. Piles of recycled brick, neat stack of new bricks, and many piles of broken bricks that no one has yet bothered to haul away. Construction is everywhere, yet still has so so far to go. Dust. Oh the dust. A perpetual yellow haze hangs over the city and coats everything left outside. In spite of all this, the tourist district is bustling again; Nepal is open for business. 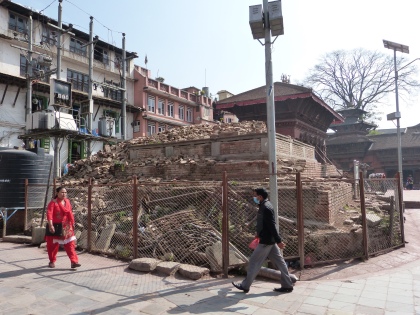 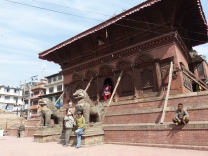 Scenes from a shaken city

The drive today also reminded me how aching poor Nepalis are. The homeless are everywhere and by comparison the cardboard shacks inhabited by SoCal’s homeless seem like palaces. My tour guide said that over the last 10-20 years, there has been a mass migration from rural Nepal to the city where hopes for a brighter future collided with the harsh reality. Yet in the face of hardship, the Nepalis remain upbeat. My tour guide talked proudly of how Nepal is now a democracy after years of incompetent governance in a country run by kings.

I spent the late afternoon completing my supply shopping, and having a last beer and pizza in relative civilization. Tomorrow morning I will be drive about 185 km (8 hours!) on the Araniko Highway, arguably the most dangerous section of road in the world. I checked it out on Google maps and all I can say is that I hope I can ride shotgun.