I feel lucky to be alive tonight. I have survived the most dangerous part of my trek, the 200 km drive to Jiri. But let’s start at the beginning…

My guide, Bahkta and my porter, Gokul (who is a slightly darker version of the Marlboro man), met me at my hotel at 8:00. We also had a driver who I am pretty sure is in training for the Indianapolis 500.

Our car was a small Toyota sedan, and we all clambered in and headed out into Kathmandu’s traffic. I asked to sit shotgun, and man, was that a good choice! Bahkta and Gokul stuffed themselves in the back. The first hour was spent getting out of Kathmandu. On the outskirts of town we passed mile after mile of brick factories; the Nepalese were busily creating the tools for their own demise during the next big earthquake. The traffic was stop and go, mostly stop. Finally we emerged onto the the Aranko Highway, a route built by the Chinese in the 1960s that connects Kathmandu to the Tibetan border. After a couple of hours we branched off onto the B.P. highway, a new road built by the Japanese that connect Kathmandu to the southern lowlands.

Let me describe these roads: hair raising (if I had any), vomit inducing, ass-puckering and pee loosening doesn’t begin to do this route justice. Nominally 2 lanes, in reality it would be a generous bike lane in the US. Often, when a truck and a bus pass, both vehicles would slow to a crawl, and inch past each other with mm to spare, horns a-honking the entire time. The road climbed and fell, often with shear drop-offs. Guardrails? Who needs ’em! My driver drove like he was late for his wedding (more likely his funeral). With incredible skill he passed all manner of slower vehicles with inches to spare between us and oblivion. And all this describes the first half of our route.

About halfway, we made a quick stop for lunch – delicious dal bhat and curry.

Fear makes the best spice. After lunch, the route crossed a bridge and followed the Tampa Koshi River to the north. The road was now an ancient, nominally paved, single lane trail, pot-holed and washed out by floods over long sections. The road demanded 20-30 km per hour, my driver insisted on 50+ km per hour. Any on coming traffic was negotiated via a game of chicken; we won more than lost. The road then left the river and climbed, and climbed and climbed. Finally, we reached Jiri at 3:30 pm, for a 7 hour 30 minute time – probably my driver broke his own world-record. Jiri turns out to be a rather dismal village at the end of the road. Main Street is a wide but rough dirt road. We checked into a small Sherpa guest house. I bought my crew a beer, and we had another meal of dal bhat. I feeling at once excited and apprehensive about the coming trek. Tomorrow it begins. 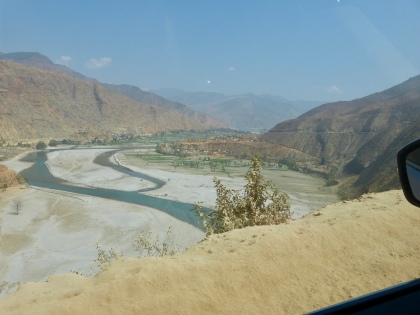 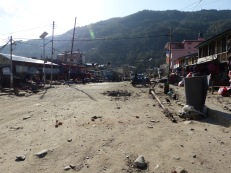 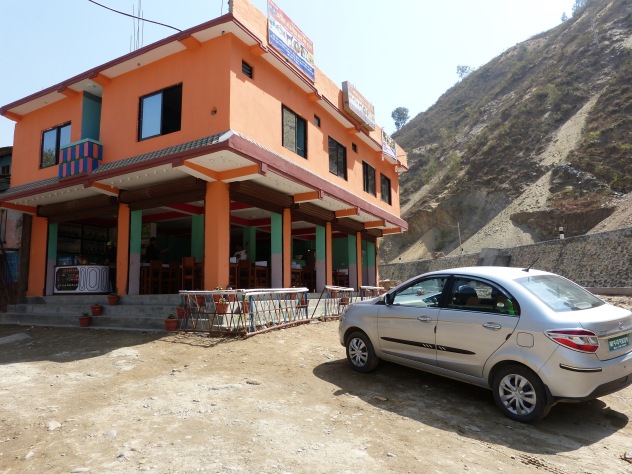 2 thoughts on “Highway of Death”