There is no better way to experience the chasm that exists between Thai and American culture than to witness some of the rituals surrounding a visit to a Thai temple.  Recently, I visited Wat Chai Mongkhon with my SO on the occasion of her birthday.  Wat Chai Mongkhon lies on the banks of Chiang Mai’s main river, the Mae Ping.  To my pagan eyes, it seems like a fairly ordinary temple, although its riverside setting is lovely.  That same setting, though does allow for a peculiar ritual that I observed there for the first time.

On this propitious day, our first stop was a small shop tucked back in a corner of the temple grounds that sells all manner of live fish ranging from guppy-sized up to small-trout-sized.  The same shop also sells various birds in tiny wooden cages – most of these seemed to be some kind of dove.  They also sold live snails, by the bucketful.  This was no pet store though.  The express purpose of this shop is to sell the animals to merit makers, who then make merit by releasing them.  Hmmmm, more on this in a minute….

From the shop we proceeded directly to the temple’s interior where a quick prayer was said accompanied by a few bows and wais to buddha.  This part of the ritual I am quite familiar with and lasted only a few minutes.  From the temple we proceeded to the river bank, where amidst a few more bows and the recitation of a long prayer read from one of the laminated sheets picked from a basket on the pier, both the snails and fish were released.  Their release was followed by a nearly instant eruption from the river – a vicious feeding frenzy of huge carp-like river fish.  As far as I could tell, the newly freed snails and small fish experienced a few nanoseconds of freedom before becoming dinner to these exceedingly well-fed riverine scavengers. 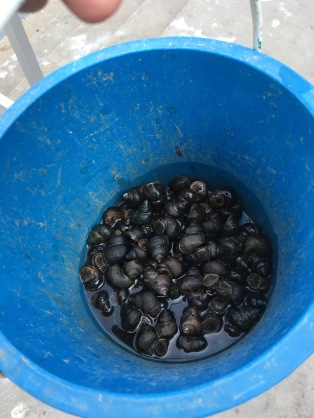 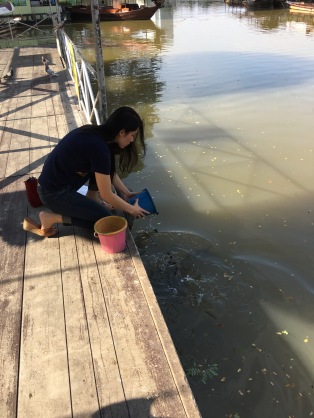 Ok.  To the American mind, this seems very strange indeed.  So let me get this straight, someone goes out and catches some wild critters, keeps them in tanks, buckets and cages, and then someone else comes along, buys these unfortunate critters, and makes merit by releasing them to the freedom of the river, only for them to become instant dinner to some lucky fish.  One would guess that the freed birds might have a better chance to enjoy their freedom – at least you could enjoy watching them fly away to meet their fate, but alas, their cost is quite a bit more.  The American mind cannot help wondering if the merit made by the purchaser sufficiently cancels the merit lost by the animals’ capturers, keepers and sellers.

Now. Here is how the Thai mind sees it……

Sorry, but I have no clue how the Thai mind thinks about this ritual, in spite of numerous conversations with Thais about this very subject. I do know that each kind of fish/bird/invertebrate has a particular kind of merit that is gained by their release.  Some impart good health, others will bring good luck with finances, still others will impart a long life.  You get the idea.

When I asked who decides which animal imparts which kind of merit, my SO replied that that is like asking who decided the meaning of a word.  Wow, that was a very revealing answer! Apparently this ritual goes far back into antiquity, and involves deep beliefs that have been passed down through so many generations that their origins have been lost.  These beliefs run gut-deep and no manner of western logic will unseat them.  My guess is that if you brought a Thai into the Catholic Church of my youth, they would be equally mystified.

The third and last stop in our merit-making was a ritual that I have experienced on numerous occasions – one of my favorites.  The merit-maker grabs an open-ended cylinder containing about 30-40 joss sticks with each stick bearing a number.  While kneeling in front of a particularly plump and happy buddha, the merit maker gently shakes the container until a single stick falls out.  The number on the stick is then matched to a set of fortunes posted on a nearby bulletin board.  Here’s the fortune we got: 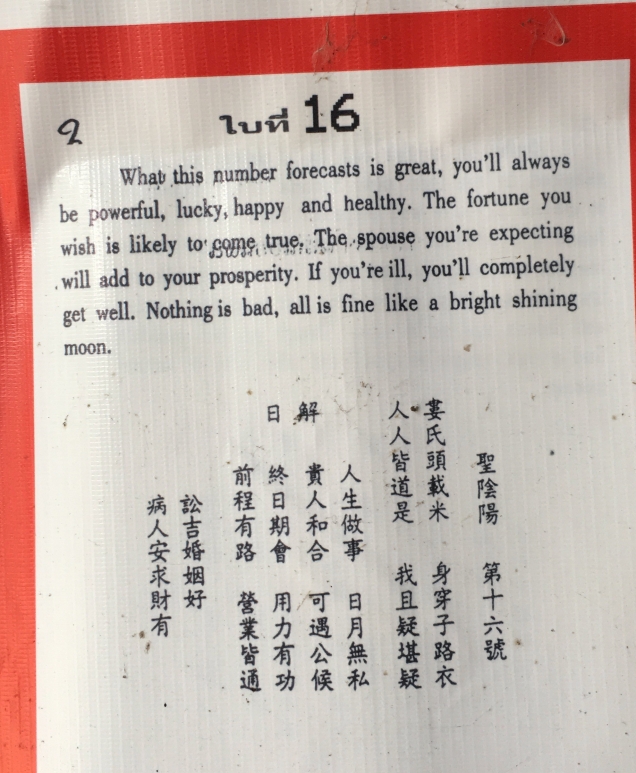 I don’t think you can do much better than that!  All in all it was a very educational visit to the Wat Chai Mongkhon.  Please if any of my Thai friends read this, please leave a comment with your explanation of this interesting and (to a western mind) contradictory ritual.

One thought on “The Great Cultural Divide”