Chiang Muan doesn’t even have a traffic light. Lying half way between Phayao and Nan, tucked neatly in a basin surrounded by mountains, this small district within the Phayao Province has a population of just over 19,000 widely scattered over 723 square kilometers. The entire district consists of 3 small villages, with most of the population living in the surrounding rural areas.

I am staying in the largest of these villages which fortunately sports two small hotels.  My first choice had a for sale sign hung on the office door, and no one was around.  My second choice did not have a for sale sign, but also was deserted.  Fortunately, the phone number on the sign worked and rustled up a gap-toothed local guy in a beat up pickup truck.  He took my money and gave me a key, no passport, no sign in, no credit card.  I love these small villages!  The hotel (not sure it qualifies as a hotel with only 4 rooms) was actually very nice with a decent sized, clean room with a/c, hot water, twin beds, and a small refrigerator all for the princely sum of 500 baht (just over $15).

Todays ride took me over one of the many branches of the Phi Pan Nam Mountains. Here the range is not particularly high, my high point for the day topped out at just under 700 m.  All but the steepest slopes were covered with corn fields turned to the their post-harvest brown.  The ride over the mountains was very peaceful, no traffic, no villages, and only the occasional farmer tending their fields and waving at the crazy man huffing and puffing up the hills.

Tomorrow I will reach the “summit” of my trip.  I have always looked at Nan as being my ultimate destination.  A shortish ride over another range of hills should get me there by early afternoon.  Talk to you from there.

Today’s route from Phayao on left to Chiang Muan on the right. 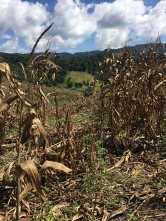 The gentler slopes of the mountains were covered in brown cornfields. 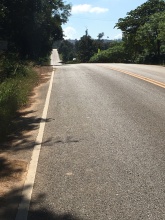 Roly-poly hills greeted me after a fast 25 km on the plains south of Phayao. 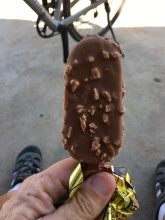 The reward for a hard-days ride. 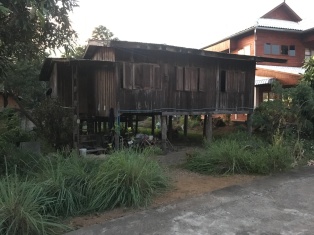 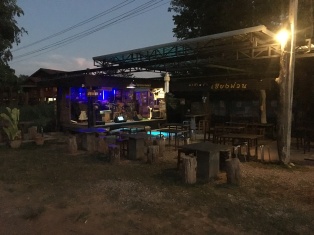 Wild Saturday night in Chiang Muan. Maybe it will be packed later?