Nevada and it’s neighbors lie in North America’s Basin and Range Province, made

famous in John McPhee Pulitzer Prize nominated book of the same name. Have a look at any map of this region and the mountain ranges on the map look like a swarm of worms fleeing Mexico for Canada. A look at a map of Northern Thailand shows a similar pattern of twisted worms headed for Myanmar and Laos, albeit at a smaller scale. Like in Nevada, the Thai Basin and Range formed by stretching of the earths crust resulting in down-dropped basins, and up-thrown ranges. Today I rode along the edge of one of these worms, southward along the eastern edge of the Chiang Khong Basin. Mostly 4 lanes, but with very little traffic, the road gently rolled along the edge of the mountains. Today was supposed to be an easy day, only about 77 km, but after yesterday’s 119 km marathon, and with bright sun, a hot headwind, and gently rolling hills, It did not feel so easy.

I had my first accident today. I was riding slowly up one of the hills, with my feet firmly clipped into the pedals, when I spotted a view suitable for a photo. I swerved off the road into a small driveway, but as I rolled to a stop, my toe clips picked a bad time not to release. With both toes locked to the pedals I did an inevitable, slow-motion fall onto my hip and elbow. Fortunately, I suffered no injuries save a badly bruised ego. Could have been far worse – there could have been an audience. 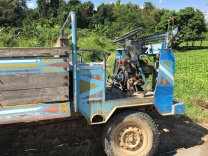 I-taens have removable engines designed to be multi-purpose. 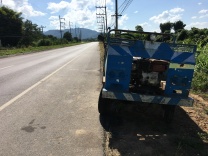 The Chiang Khong Basin is agricultural heartland. Rice silos lined the road, and it seemed every flat spot was taken up by harvested rice drying in the sun. Rice in Thailand is still mostly harvested by hand, threshed by small portable machines, then laid out to dry on any available surface. The drying reduces the moisture in the rice grains, making them much less susceptible to mold or insect infestation while being stored.

You also know you’re in true farmland when the i-taens (pictured above)  outnumber pick-up trucks. These Thai-made, colorfully decorated, all-purpose vehicles are used to haul just about anything from pigs to people to rice at a chug-chug-chug 20 km per hour. They are powered by a 9 hp diesel engine that can easily be removed to power a water pump or field plow. Today I had to dodge a few of these chug-a-lugging up the wrong side of the road.

I rode into Thoeng about 2:30 pm. It took me about 1 minute to ride out of Thoeng. Not much here (but it does have two seven-11s about 300 m apart). I had a 2 km ride out of town to find my hotel, a newish concrete block structure. Cheap and clean though. For dinner I had to ride back into Thoeng where I completed a complete tour in about 5 minutes. Outside of push carts, I only found one restaurant-cum-bar, easily spotted by the large Chang beer sign. The food was pretty awful, and I rarely say that about Thai food, but the beer was icy cold, served in a very frosty mug. I ordered a Singha beer much to the disapproval of the waitress wearing the Chang beer dress. She probably missed out on a small commission. I made up for it with a tip which was greeted by braces-filled smile.

Tomorrow I head southeast to Phayao, a lakeside provincial capital that promises to be more interesting than Thoeng. I will try to get there early tomorrow, talk to you then. 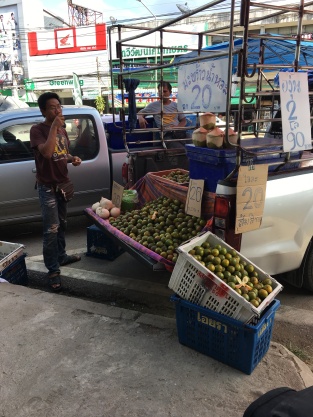 9 thoughts on “November 16, 2017 – Cycling Tour of Northern Thailand – Down the Basin and Range – Chiang Khong to Thoeng”