No internet here, so although I’m writing this on March 16 USA time, I won’t be posting until a future day.

I had another terrible night of sleep, ruined by frequent trots down the hall to pee – a side-effect of the Diamox I am taking to prevent altitude sickness – and bitter cold seeping into my sleeping bag from below. The dawn was clear, but gathering clouds greeted the start of the day’s hike. To top it off my breakfast of a cheese omelet didn’t have much cheese, and two eggs was just not enough.

The hike actually was not difficult, except for the altitude, but I had very little energy. The route followed the Dudh Koshi, with two suspension-bridge crossings. I trudged along at a snail pace, and felt a bit better after my lunch of fried potatoes, cheese, and egg. I’ve had very little meat with during the trek, just some buffalo stew lower down.  I’ll be ready for a big old steak when I get home.

After lunch, the sky had become overcast and a cold, cold wind blew.

We were now over 4,000 meters high (about 13,200 ft) and no trees broke the wind. The land had turned brown and tundra-like. Then it started to snow lightly. By the time we reached our destination, Dingboche, the wind was bitter cold and the temperature well below 0 C (probably in the low 20s F), and by nightfall a dusting of snow had accumulated on t he frozen ground.

Fortunately, Dingboche (4400 m high) is a fairly large village catering to trekkers and yaks, so I have a relatively nice lodge, with en suite squater so no cold trots down the hall tonight. In the lodge I met two young Americans, Carter and Justin, who had quit there jobs and were roaming the globe. We had a couple of hours of good conversation around the yak dung fire. Tomorrow is an acclimatization day, so I’ll be here a second night. Tomorrow, Bhakta wants me to hike up the mountain to 5100 m and back, I will only commit to 4450 m. So we I’ll see.

Healthwise, I feel like I’m handling the altitude ok, except for having to walk very slowly, one step, one breath, sometimes two. I still have the Khumbu cough, which turns into a very sore throat while breathing in the cold air. I’ll probably bring that back to Chiang Mai. My main worry is the upcoming bitter cold around Everest base camp – I’m freezing here and still have another 1000 m (or 3,300 ft) to go, which translate into somewhere around 5 to 7 degrees C colder than here. It will help if the wind stops and the sun stays out. 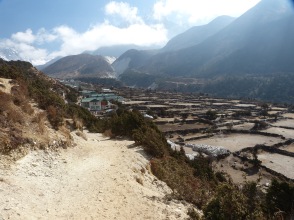 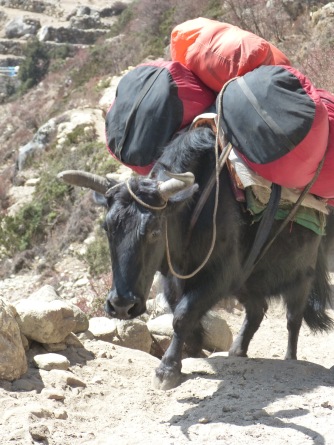